Complicating matters, the management team is usually reluctant to accept they don’t have the skills in-house. Instead, the conversation swings to “an experienced crew of Prince2 project managers” somewhere in the business.

But, while they have the manuals, they don’t follow their own processes and they can’t find the people either.

The main argument tends to run along the lines: all that’s needed to deliver a business-critical program is a PMO (Program Management Office).

This term is now a universal management catchphrase – a miracle cure for program success, like penicillin’s triumph over once-fatal bacterial infections. But few top managers can explain what a PMO is – or what it does.

When pushed, many will say it’s about “keeping score” and “telling us where we are”. What’s usually behind these vague ramblings is that a PMO is a dismal template-driven administrative process with bar charts – and you don’t need to be very bright to do it.

But the notion that “process” and well-intentioned managers with Prince2 qualifications can trump experience, good judgement and leadership is a management delusion – the doctrine of misplaced conviction.

Top managers easily grasp the accounting example, but time after time, fail to distinguish between the roles of a PMO Manager and a Program Director.

The reverse is also true; this distinction is also lost on misguided, self-important PMO Managers. Many try, in vain, to deliver business-critical programs without having any organisational clout or skills to do it.

No doctor, lawyer, accountant, tax advisor – any profession with a duty of care – could responsibly afford to take this position. Casual attitudes like these trigger appalling failures which are hugely damaging to the program management profession.

When a problem becomes clear, CEO’s tend to think it’s a temporary glitch that can be dealt with swiftly. But this instinct is rarely based on know-how from running complex programs.

By contrast, a CEO with a sales, marketing or financial background will “know” that something is wrong. Alarm bells ring telling him the story he’s hearing doesn’t make sense – and he knows he can remedy the problem before it gets out of hand.

But, he doesn’t have the practical savvy to make comparable judgements about business-critical programs. It’s mind-blowing how many senior people feel competent to make big calls about running programs – often on the back of faded, irrelevant memories.

Unlike a sales and marketing situation, where the CEO and one of his directors, would have a set of complementary experiences – this is seldom the position on a business-critical program.

On a business-critical program, the CEO is utterly reliant on the “Most Affected” Director, who is never close enough to the detail to “know” when a program is in deep trouble.

In truth, when the so-called “program leadership” is peeled away, the person actually running the program is probably two or three levels down the management chain.

Focused on the “mechanics” of the program, he has zero organisational power, has never run a business-critical program before – and would never be seen as a “superstar”.

He plays time-wasting, ping-pong in a wind tunnel all day long – with grudging “helpers” from other functions.

His job is impossible; he’s been set up to fail.

The blend of an unsuspecting CEO, a “Most Affected” Director – and an under-equipped Program Director is tragic for any organisation.

Together, they add up to one of top management’s biggest organisational blunders on business-critical programs. Read more about it in our ebook “It’s Deja Vu all over again”. 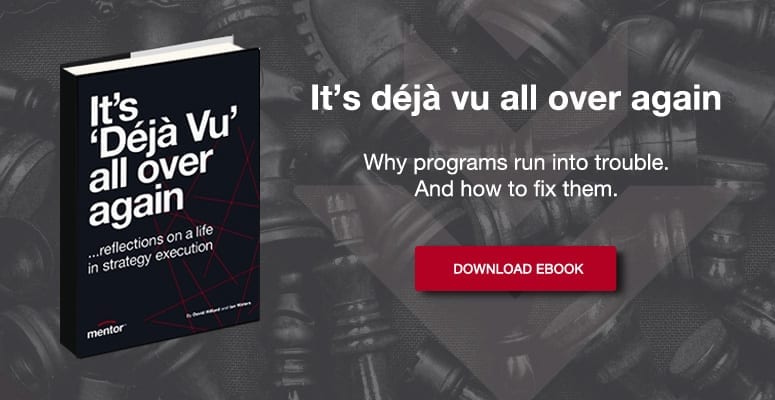