Mentor Europe > News and Insights > 5G > Deep Mobile Access: how to get your 5G program over the line

There are some critical synergies between fixed and mobile infrastructures. Winners have already exploited these, so there will be a follow-up piece on Deep Fixed Access.

Of all the pieces in the Jigsaw, this is the one where most of your capital will be spent. The capital spend will dwarf other investments in any telco business – whether you are building fixed access networks or mobile access networks. 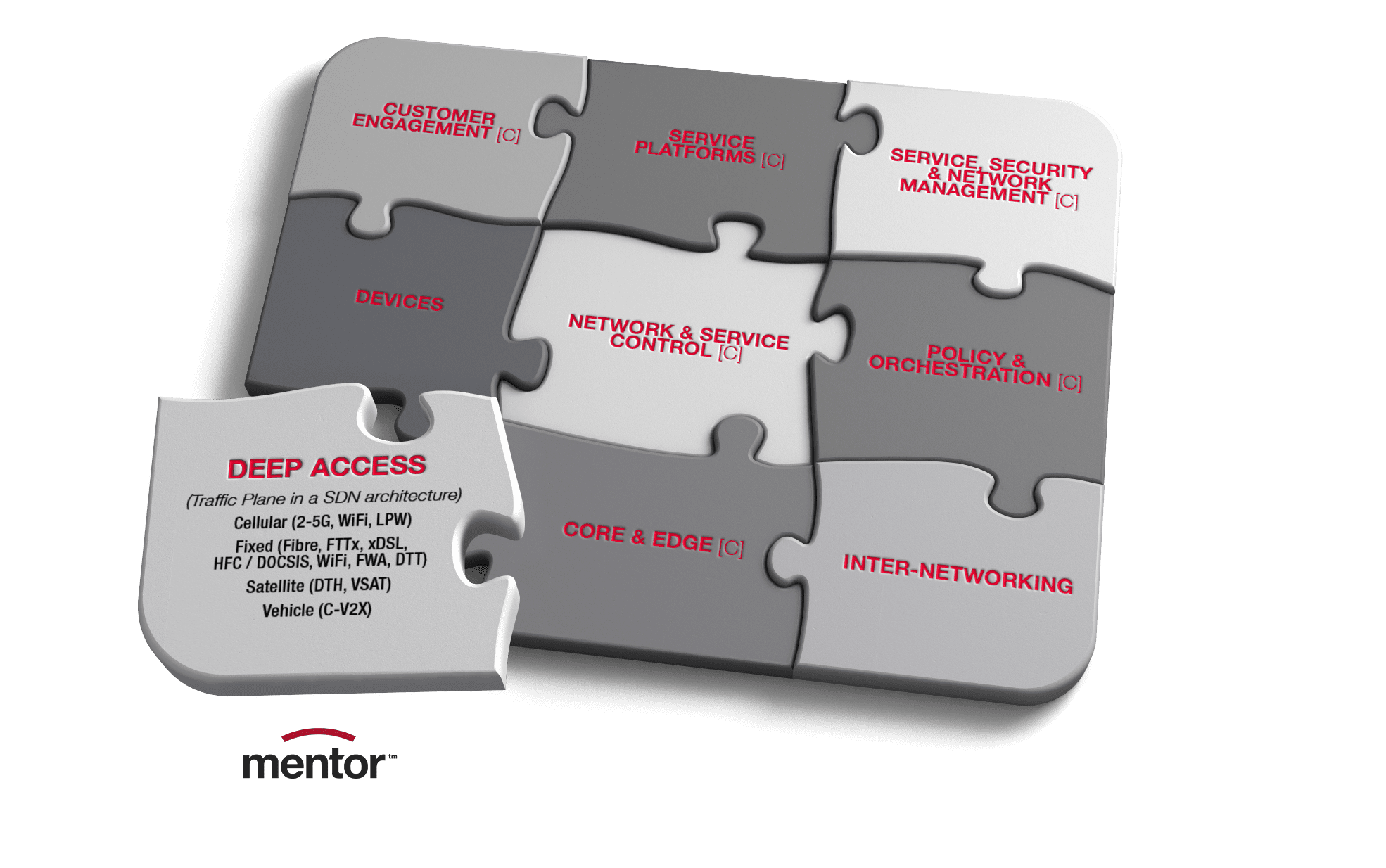 It’s also an area that has gone through huge change over the years – as successive generations of technology have ramped-up speeds and coverage – tremendously.

It’s not called the ‘final mile’ for nothing.

Deep Access has an enormous influence on the products you can offer. Contrast 4G and 2G, or dial-up Internet and super-fast broadband. Deep Access has very big implications for other parts of the architecture eg. core networks and billing – to name just two.

Let’s give you a glimpse of the major moving parts to think about.

These are twin obsessions for any Mobile CTO. They are ‘Cyclical’ and ‘Unpredictable’ – at the same time.

Cyclical, because each generation of the technology, 2G-5G, triggers yet another battle for coverage supremacy in competition with rivals – until all networks reach the so-called ‘winning post’.  Then any competitive advantage you thought you had melts quickly away.

Unpredictable, because you never quite know where your customers are going to show up on your network. At any one time, most of your network will be ticking over gently, while, frustratingly, other bits will be hitting the ‘red line.’

In rural areas, there is little competition for coverage because MNOs can’t make money there. This has prompted the UK government to intervene, auctioning spectrum with rural coverage obligations, late in 2019.

We expect to see network sharing as a solution in this space.

In a scale network, the areas hitting the red line are not that unpredictable. Patterns of work and play define a group of ‘usual suspects’ – when it comes to capacity hot spots.

But it’s dense urban areas, that demand the most novel solutions for increasing available capacity.

Spectrum and a word on Handsets

There are three spectrum maxims:

So, we have to make the most of what we have – and challenge the upper frequency limits of usability.

This demands we ‘re-farm’ spectrum used on 2G – and possibly 3G networks – and put it to use for 4G and 5G.

We must deploy ‘smart’ antennas to expand the existing capacity – and set up small cells to re-use and replicate the capacity. And be ready to buy more spectrum, when and if it becomes available.

Unless the specific spectrum band – or technology – is supported on popular handsets, then it’s of little use.  Its deployment won’t add anything to the usable capacity of your network.

Multiple-Input and Multiple-Output, or MIMO uses multiple transmit/receive antennas to improve the performance of a radio system. Since its launch, LTE has used MIMO on a small scale, typically 2 or 4 antennas.

Sprint in the US has been a particular leader in getting this technology off the drawing board and into service.

The antennas used by Sprint contain 8×8 element arrays – and currently concentrate on 3D beam-forming to increase capacity by 4x – and possibly 8x a conventional antenna.

In future, larger arrays could increase performance even more – as could any technique that combines signals from multiple base stations.

Gains from Massive MIMO at single sites are superb at solving a “3D” problem, such as getting into high rise buildings in city centres.

A single Massive MIMO site provides less gain in 2D problems e.g., in suburban areas, where users are scattered at ground level. But that’s not where the network hot spots are anyway.

Drawbacks of Massive MIMO are the physical size of the antenna. It seems that Massive MIMO antennas are indeed ‘massive’ – very hefty and very bulky.  It’s unlikely that more than 20% of sites in central London can even accommodate them – even if you could get a green light from a landlord. At best, they are a short-term placebo for the looming small cell tsunami.

Sprint uses the relatively high frequency of 2.5 GHz and its (Nokia) antennas are 65 x 50 x 25 cm and weigh 47 kg). But antennas for lower frequencies will need to scale up – in inverse proportion to frequency.

This definitely means strengthening cell towers and re-negotiating site agreements.  But, it’s already clear there are sites where we just won’t be able to deploy this technology.

Small Cells, Dark Fibre and a word on Wi-Fi

The next ‘bullet to bite’ in searching for extra capacity is densification.

This is the process where a cell site maxes-out of capacity – you surround it with smaller sites running at lower power, so they don’t interfere with the original site.

In theory, you can have the same capacity on each small cell – as you have on the main site.  As a result, in the old coverage area, your total capacity is scaled up significantly – as small cells are rolled out.

There is a clear industry consensus for small cells that it’s not ‘if’ they’ll be deployed in volume – but ‘when’.  We’ve been advocating the deployment of small cells in the UK for several years.

We believe it’s the only long-term, sustainable solution.

Networks are scrambling for Massive MIMO to buy themselves more time, while the industry continues to grapple with small-cell implementation challenges.

These challenges include a dearth of Dark Fibre supply to provide the backhaul for what will literally be:

On small cells, we will hear lots about 5G “mmWave” spectrum (which will initially be in the 28 GHz band in the UK). This offers huge potential, but limited range at these frequencies will make cells very small indeed.

And handsets/devices will need extra radios to use this spectrum.

Wi-Fi is actually a network of un-integrated small cells – from a mobile perspective. It’s subject to the same trends of spectrum, efficiency, and smart antennas. And it’s already deeply rolled-out in key dense urban mobile hotspots – and carries lots of traffic.

For mobile, making the most of Wi-Fi is critical – to make sure your customers get an excellent and seamless experience when using it.

RAN architecture might seem a bit “grandiose” for Mentor – but it’s going to be really important to make the most of small cells – and to exploit the service and product possibilities of mobile-edge computing.

A multitude of small cells will bring the twin management challenges of reducing interference – and optimising customer experience.

One solution to this is to break the cell into “dumb radio” and “smart base station” functions.  The smart functions are centralised – often near the local macro site, using Network Function Virtualisation (NFV) kit.

This allows cutting-edge group processing to harmonise coverage across all the small cells – and the macro.  Although ‘dumb’ radio is both cheaper and simpler to manage.

There are competing ideas as to how to divide the functions between ‘dumb’ and ‘smart.’ And you may come across jargon such as “MAC Split” and “PHY Split”.  The different approaches make very different demands on the fibre backhaul – and may affect the services that can be offered.

The final topic for today is Backhaul.

Clearly, we can’t afford to have valuable cell site capacity limited by backhaul provision. There’s been a lot of interest in dark fibre, not just because it is cheaper than managed services – but because it is inherently more flexible to upgrade, as traffic volumes increase.

Mentor has a clear position on fibre for mobile. We want to see dark fibre generally available in the market and we believe the MNOs are crucial in making this happen.

Deep Mobile Access is a hugely important subject for the industry – and for the UK.

We’ve reviewed some of the key issues in Deep Access and touched on the inter-connections with other pieces of the jigsaw.