by David Hilliard
in News and Insights
Comments

Have you ever settled in for the evening to watch a movie that looked fascinating? Only to realise within minutes of pressing play, you’d seen it before and it wasn’t very good?

Have you ever been excited about a brand-new program you are working on… only to discover a number of program-killing issues you’ve seen before?

In both situations, you’d feel quickly let down, uninspired, and dreading the long slog ahead.

Let me share a scenario you’ve probably come across before:

Your company sets out on a ‘blockbuster’ program – something new and exciting – and nothing like the company has seen in a very long time. A game-changer built on a brand-new strategic direction for the company.

Plan variances grow wider each week. Variances are explained away as teething problems that will be recovered.

Management thinks the targets are ‘tight, but achievable’. They expect people to execute at standards they never have before.

Key resources are not available to work on the program when they are needed. Many are working on business-as-usual priorities elsewhere and can’t be spared.

Repeated attempts to plug skill gaps, with additional internal resources and outside contractors, have been a disaster. Inexperienced and unsuitable candidates have been brought in – slowing down progress further.

The company blames suppliers for misleading them about what was “in the box” and what was “out of the box”. Yet, the suppliers felt they had been fulfilling their contractual obligations from the start.

As differences surface, the suppliers frustrate management by raising costly Change Requests – which they expect the company to pay for.

Eventually, it becomes glaringly obvious the train has already said farewell to the rails. Staff are demoralised, shooting for milestones that are already in the rear-view mirror.

When it is clear plan dates are no longer achievable, program leadership have to take it on the chin – and reset the plan.

Yet, a reset is futile if it doesn’t reflect the many hard lessons learned up to that point. Every reset must fix the root cause problems that drove the program into a stall, in the first place.

For example, if in the light of actual performance, plan metrics need to be adjusted, this cannot be sidestepped. Otherwise, problems will simply return again – just like the proverbial boomerang.

A program may get marginally better results for a time – just through management changes, improved escalation, and so on. But, if root cause problems are not resolved, not much else.

Without major surgery, there are zero reasons to imagine there will be a step-change in productivity and performance.

Against this background, what do you think the chances are of this program succeeding – second time around?

Around 30% – some people would say. Although those who have experienced many resets in their career would probably put that number much lower.

It’s time to do things differently

We have run over 100 program salvage operations in the last 30 years and have learned a thing or two about why identical failure patterns keep repeating.

We’ve discovered the main reason for program delays, overspends and failures are mostly to do with “groupthink”.

Groupthink is a psychological phenomenon in which an unhelpful craving for team harmony and consensus overpowers rational decision-making.

The truth is: team harmony and a rigid compliance with any lifecycle structure cannot counteract the many intricate demands of program management.

To win, you need judgement, experience and flair, coupled with a hefty dose of courage and tenacity.

Program management methodologies are extremely valuable. Even so, they barely wink at crucial factors like – previous track record, hard-won experience and proven ability.

What’s needed is an extra layer of smart insights to straddle traditional PMO approaches. And a convincing way to drive compelling conversations with management on program issues that are notorious program killers.

They can’t be intellectualised.

The Mentor Execution Index (MEI) is a brand-new way of assessing a program’s health – quickly, accurately and cost effectively. It is based on our proven execution framework, The MentorBlueprint.

Whether you’re starting something new – or resetting an existing program – the MEI delivers a comprehensive assessment of a program’s health – based on the 5 factors that must be nailed to guarantee program success.

And Culture, adds another dimension – which underpins all 5 critical factors. 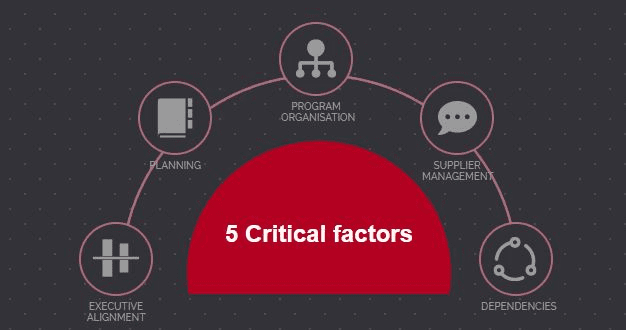 The MEI is based on many thousands of hours working on program rescues, over three decades.

Frankly, every program crash we have seen was caused by pilot error. Failure patterns are so alike they are almost impossible to tell apart.

Miscalculations people unwittingly made – squandering large amounts of time and money in the process.

Critical to success is having the knowledge and competence to stamp out potential program killers – before they happen.

With the help of AI technology and smart data analytics, we have been able to move beyond the obvious and apparent reasons for pilot error.

With the MEI, we can now eliminate the root causes of the most critical mistakes – long before they become too big to handle.

And, we’ve reduced non-critical ones too.

An ironclad opportunity to defy the odds

With the Mentor Execution Index, senior management can be much more single-minded about doing what it takes to succeed.

It removes a ton of guesswork from the program lifecycle process. Effortlessly.

It’s hard to do much about stuff that’s already said goodbye to the rails, so shining a light on lead indicators of performance, rather than lag indicators is a huge benefit.

Most of all, it truly simplifies and streamlines program execution – and provides companies with an ironclad opportunity to defy the odds and mastermind program success, every time.

Let’s be frank: risking a program failure is a pointless extravagance, especially when it’s so preventable.

Don’t gamble on your programs’ success. Predicting and fixing program problems – before they happen – is the stuff of dreams in program execution.

The benefits are unmistakable for any program at risk of hitting a big, bright red light at full throttle.